Time for something a little different.


Most of you know I LOVE birds. I am what they call a backyard birder. What that means is I am a bird watcher but I identify birds only in my own backyard. This backyard is at my weekend getaway in Pennsylvania. In the time I have been there I have sited and identified 249 different species of birds.

I have some particular favorites - such as the exciting, fun and energetic hummingbird, that can just hover in mid air, and buzzes me in the spring to tell me it's time to put out their nectar feeder. 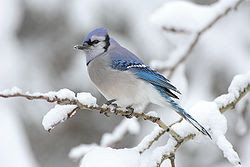 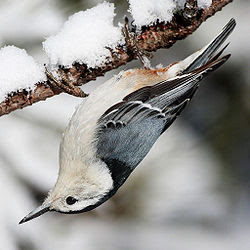 and the white breasted nut hatch, with the quirky honking sound that it makes and the way it crawls head-first down the side of a tree.

This picture is not upside down. This is very often how you will spot it. 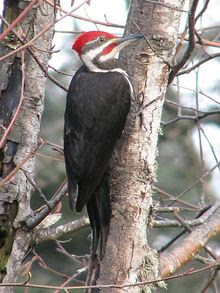 And the awesomeness of the rather rare sighting of a Pileated Woodpecker. Part of the awe in sighting this bird is it's very large size.

I love birds so much I even have a few as pets in my own home - their names are Giacomo, the tiny little parrottlet, my 2 finches Poncho and Bianca, and my new addition, a baby Moustache parrot, DaVinci.


So I thought I would show and tell about the state birds from the states where some of the PetsJubilee team members live.
In alphabetical order by state:

Alabama's state bird - is the Northern Flicker, also known as a yellow hammer. It is a type of wookpecker, and it makes a distinctive sound of a ki-ki-ki-ki. 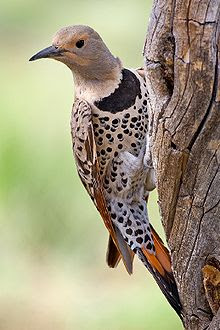 California's state bird is the California Quail. What a strikingly pretty bird, that I know absolutely nothing about.: 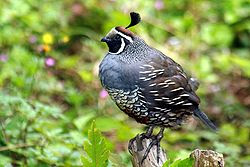 Connecticut's state bird is the American robin. I can always count on this bird to be one of the first birds to bathe in my bird bath when I get it ready every spring. They seem to like to nest under my awning every year. 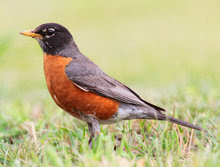 New York's state bird is the Eastern Bluebird. Here is a really pretty male/ female pair. The male is the brighter one on the bottom, as they are in many, but not all, bird species: 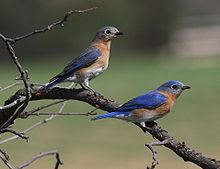 Ohio's state bird is the absolutely beautiful Cardinal. Here is the male. The female is also red, but not nearly as bright red.:

Pennsylvania's state bird is the Ruffed Grouse. And of all of the 249 species I have seen in my backyard, including lots of Turkeys, this is not one of them:

Texas' state bird is the Mockingbird, and so is Tenessee's. I love all the different sounds that the Mockingbird makes. It also loves to mimic other sounds it hears. I can always identify this bird quickly by the way it flicks its tail when it sits on a branch: 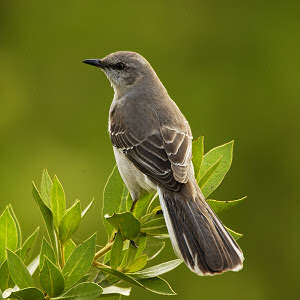 Washington's state bird is one of my favorites, the American Goldfinch.
This bird is a frequent visitor at bird feeders, and this is the color of the male during breeding season. The female is similar, but more of a greenish/gold hue and not nearly as bright.: 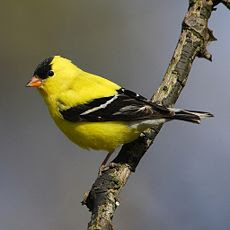 I know at least one of our PetsJubilee peeps is from British Columbia.
This bird, the Steller's Jay, was voted the most popular there:

I hope you enjoyed this Tuesday's blog of SHOW AND TELL.
COME BACK NEXT WEEK - FOR GAME STOP TUESDAYS.
Posted by Giupetto and Gianna Tails at Tuesday, August 31, 2010

Diana~
This is an absolutely stunning, beautiful post!! How lucky you are to have the company of such beautiful friends! And the state birds are wonderful....
I, too, love to sit on my deck and watch the animated comings and goings of all the beautiful birds that make their home or visit in our little patch of land. I, unfortunately, am not nearly as educated as to what or who they are, but I truly enjoy the peace and joy they bring as they flitter in and out of the many trees in our yard! Out of curiousity, I looked up the Massachusetts state bird and lo and behold, it is a Black-Capped Chickadee! Something I see constantly among the trees and nests in our yard! I am so glad you posted this and caused me to look further into all the beautiful birds that grace our area. I believe I'll pick up a "bird-watcher's" book so I can begin to really study and enjoy the company I have here in my own little piece of the Earth!! God Bless!
Thanks for a wonderful post!
Kelly ;-)

Diana, love the photos. Your birds in your area are way more colorful than ours. We mostly get sparrows, robins, little black birds with orange beaks, doves, quail, phesants, and chickadees. Then, you have the preditors. Hawks, eagles, ospry, starlings, large crows and ravens. Nice blog.

Thanks guys. Lori, I will give you the name of a good bird watching book, to get you started - but beware - they say once a bird watcher always a bird watcher.
Athena and Lori - the black capped chicadee is another of my favorites. They are so curious and fun. ALWAYS the first to any new bird feeder. Hawks have such beautiful colorings too.
Athena when you start trying to identify a species, you start to marvel and the markings on a bird you never realizes were there before.

Kelly why do I keep messing up your name - Lori is Kelly. SO sorry.

A field guide for your area by Roger Tory Peterson is always a good choice.

This was a wonderful, beautiful idea!! You are so smart -- with the best ideas! I love the opportunity to talk to team members who are all over the place, and to get to see all your and their regional birds was such a pleasure :) I am a birdwatcher, and you're right: once you ever begin, you won't stop. Such a simple pleasure and so much fun to be a detective, figuring out what it is you're seeing... I love all the birds you posted, and was interested that robins bathe in your bird bath. I have lots of robins, but have never seen one in the bath. That's another thing about watching the birds -- you learn the neatest things. Stuff you'd never know otherwise. I've watched cardinals beaks turn from black to the bright orange. Didn't know that babies are born with black beaks... Now I do, and we're all getting to 'watch' DaVinci's beak do the same :) Birds are very, very special and deserve every minute of our attention to them!

I love this! Fantastic! I love bird watching. My property has a waterscape with lush landscaping and we have herons, hawks, owls, blackbirds, woodpeckers, frogs and all other assortments of birds. I love watching them. Hummingbirds too.

I am happy to say that in my backyard I often see our state bird,the cardinal. I love it especially in the winter. His bright red body against the fluffy white snow is dazzling. I also see many bluebirds! I live near parks that I frequent and see them often. Love that Canadian Bluejay! My DH can walk through woods, parks and identify many, many birds by sound. He is amazing! Great post!

Diana - I loved this SO MUCH - we see most of those birds here too in British Columbia....and at the end of every summer I hear the Northern Flicker's distinguished sound and they buddy up with the Stellars Jays - they are always in our yard.....

This was a delight to read and see the gorgeous pictures.....made me so thankful to God for having been given these beautiful creatures to enjoy.

One of my favorite things to do is to sit outside with my coffee and listen to all the birds' talking - they are so happy and thankful. They know that God cares for them and provides for their every need. How much more will our Heavenly Father care for us as humans.....we truly are blessed - us humans.

Thank you for taking the time to post this! Loved it!!

hi diana. idaho's bird is the mountain bluebird, there are over 400 species in idaho. very interesting blog. birds are so majestic and beautiful! enjoyed the pics

This was fantastic! Beautiful and educational! I love watching birds in our backyard and trying to catch photos of them.

LOVE the birds! I have a nest ID book....that is fun, but the birds are so pretty.
(PS does that mean i am kelly?) lol