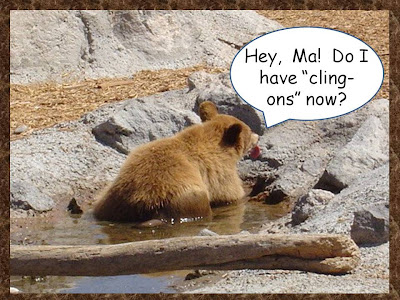 Hey all!
I have been watching the news for awhile - what else to do in this heat but stay inside right? I noticed a trend taking place. I call it Bad News Bears! First there was the one where the Colorado bear broke into a car July 22, 2010 to get at a peanut butter sandwich, disengaged the brake and went hurtling down a hillside whilst honking the horn for 45 minutes. Here are 2 links for evidence!
http://www.mercurynews.com/breaking-news/ci_15590774?nclick_check=1
http://www.musclecarblog.com/1463-sandwiches-bears-and-wrecked-cars-oh-my
Yosemite National park has reported a six fold increase in 6 years -more than 1,100 car break -ins last year alone! It is said they attack a car an average of one every 8 hours. The funny thing is that they seem to prefer Toyotas and Hondas due to their lightweight construction- making the vehicles just a tin can for their super powerful claws and jaws.Park Ranger Shelton Johnson says that one generation of bears is teaching the next how to do this, as it is part of the foraging skills and bears are quite good mommas.All the way back in Oct. 2009 in Colorado a couple reported their car was being stolen but no it was...you guessed it- a bear! here is a link with PHOTOS!
http://www.dailymail.co.uk/news/worldnews/article-1220863/Car-thief-actually-bear.html
Another incident occurred in Baker Lake Washington State earlier this August. A bear found a cooler and full of 2 types of beer. Now this is a bear with fancy taste. He drank 36... yes 36! Rainer Beers! he left the Busch Beer alone- but only after tasting one, and leaving the can partially finished. No other Busch beers were harmed. This particular bear was then found ... passed out on the lawn of Baker Lake Resort in the midst of his drunken destruction. Park rangers could not get the bear out of there- until he slept it off!!!!!! They could only get him to leave by putting more Rainer through the forest. Along with doughnuts for that hangover. Ok, they can open door handles. But if these bears have developed a taste for high priced beer, how are they going to feed (read PAY) for their addiction? Here is how: An attempted bear perpetrated carjacking
http://www.youtube.com/watch?v=OssNau9_NxI
The Russian bear contingent seems much more organized and evolved, not to mention brave.
http://englishrussia.com/index.php/2006/08/21/russian-bears-stop-cars-and-demand-food-photo/
I have a theory about these shenanigans. I think all of these have somehow been influenced by a particular Toilet Paper's TV commercials. is it so hard to believe they wouldn't have TV if they are running around doing all of these other things?For years we have been subjected to those TV cartoon commercial bears and their TP adventures- I can only picture a wilderness despoiled by little wads of TP. Then, baby bear has "cling-ons" . Now, while these ads do illustrate the parenting skills of momma bear and her OCD cleanliness fetish, papa bear is now encouraging Jr. to destroy the environment by soaking up a lake with the TP from a canoe and killing all of the fish. I wonder what they brought the TP onto the canoe for in the first place. These bears must be POOPING IN THE WATER- EW!
A list of newly the acquired bear skill-set

Ok I can admit the last 2 were obviously done by cartoon bears ( and we are not even going into all that Yogi has done through the years), but why would the bears be limited to anything? After mulling this over for some time now, I have come to a conclusion. Is it really so far fetched to think that 'SMOKEY' the Bear was actually responsible for a forest fire by a carelessly tossed cigarette and those PSA's were his community service? You don't see them so much anymore do you? So he must have completed his sentence. Seriously, though is cigarette smoking so hard to believe when they have video evidence off the examples above. What will all this lead to? 12 step programs for the ursine populace? Bear interventions? Cub lockups? Its quite obvious they know what they are doing and perhaps have been smarter than we knew all along and were just stringing us along at the zoo and circus to keep their crime sprees under wraps and non prosecutable . I think the proliferation of video cameras and camera phones is about to blow the lid off of this plot by the bears. But by then they will probably know how to use those too.

Posted by SassySashadoxie at Thursday, August 19, 2010

"Bear with me' has taken on a whole new meaning! Entertaining though I wouldn't have thought so a few weeks ago when my son was camping in the wilderness of PA for 5 days!

This was great! Loved all the videos and stories. I have a few of my own - bear stories. I love bears. :-)
Thanks Lori

Hysterical, Lorin!! Never mind the pics and videos....the images I have in my head now from your descriptions are far more entertaining! Well done ;-)

This is so funny! Your descriptions and comments are the funniest, though. And to beat it all, on the news this morning was a story of bears guarding a marijuana patch. They sure are branching out, huh?

Well you see Alice, that just goes to prove some of Lori's statements. LOL

Sasha, the dachshund, here. Yes, bears have a whole crime organization that starts with cub scouts all the way up to major organized crime. You know the movie about the crazy guy who wanted to be one with the grizzlies who got eaten. Well, rumor amoung the doxies is the bears put a hit out on him cause he had discovered a pawsible location of the bearism network. Oh, and the squirrels are in cohoots with the bears.

Alice- no way! Do you have a link? i am gonna google that one!


Tell Sasha SHHH, she doesn't wanna be known as a loose lips. But that bear dude was really...weird.