Growing up I always had dogs and cats.
Our dogs were usually a type of retriever or Labrador mix.
One of the bonds I had with my Dad was our love for the dog shows. We would always watch them together.
My love was always the Afghan hound, and my dad LOVED the Golden Retriever. 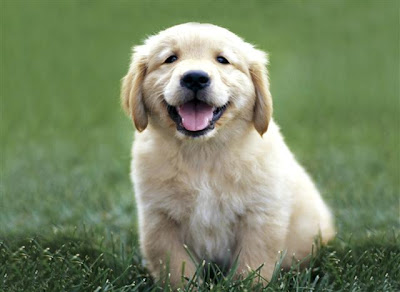 When our dog Huxley, a black lab/German shepherd mix, passed away, my brother and sister and I decided to do something special. We were young but I had some money from tutoring and babysitting, and we searched and finally found Golden Retriever puppies that would be ready to adopt for Christmas.

We brought the puppy home Christmas Eve and hid him downstairs, hoping he would not bark. (Of course we were down there with him most of the night.) But he was so good, and did not bark.

The following morning, Christmas morning, after we opened all of our gifts, we said, “Oh, there is one more” We went downstairs and put the puppy in the wrapped box we had all ready with a big red bow on top, and placed the puppy inside.

We put the box on his lap and the box began to move and of course he thought it was a joke gift. When the puppy popped his head up and out of the box! A beautiful, dark gold, adorable puppy.

Well my father had no words…. He picked up the puppy and walked out of the house....
You see, he was too choked up to speak, and not being an emotional man, did not want us to see him crying.

Later he walked all around the neighborhood showing that puppy to everyone.

He wanted to call him Chips, but as this was our very first pedigree we needed a sir name for the official papers. :-)
So he named him Sir Andre' Chips.
My favorite Christmas ever.
(This is not Chips, but looks a lot like him)

We knew my Dad wanted a new dog, and knew he would accept this new addition.

I don't think we expected such an emotional response though. :-)

Posted by Giupetto and Gianna Tails at Tuesday, December 07, 2010

Diana - what a wonderful story! just so very heartwarming. I bet it was your father's best Christmas ever!

What a wonderful memory and such a sweet thoughtful gift fr your Dad.

I remember taking my Boxer/Terrier mix, Libby, home with me for Christmas. My sister had tied little candy canes in the ribbons on top of all her packages. When we went to bed on Christmas Eve, Libby licked all the candy canes and in the morning when we started opening gifts, they were all sticky and yucky to touch. We all thought it was funny, except my sister.
Sue

Love the story Sue. LOL
Keep them coming.
Shari, I bet it was his best Christmas ever.

I think what this reminds me of is the way our local shelter is currently doing business. They are marketing to adopt a pet for the holidays. Seriously, I am so against this. Like you said a pet needs to be a thought out and family decision. There is a lot going on during the holidays and picking up a shelter animal that usually comes with issues is not what most folks want to deal with at this time. They were advertizing waving adoption fees and all these things. I know they are over run with animals in the shelter right now, but seriously, is this in the best interest of the animals to build their hopes of having a forever loving home just to be dumped somewhere after the holidays?

Sorry, didn't mean to get preachy, but it just bugs me. Oh, and I know your story is nothing like that because you did research and it was a thought out process. It is just what the story reminded me of.

Whoo, that brought tears to my eyes. What a great story to have!

Our Freya's a great dog I love her that's why she got to be my shop's name, but I think most other folks would have dumped her at the Humane Society when she turned 6 months old. What a handful! We've watched a lot of her siblings go through the humane society. We should've done more research before we bought a lab/coonhound/heeler cross.

Regardless, I can 100% say she changed my life in the most positive way possible. I wouldn't be doing agility or making collars if it wasn't for her.

Well, the important thing is Bree, that you stuck with it, and with enough patience and understanding, you made it work, and work out it did with the shop and everything.
Athena, I so agree. That is why I made sure I added that comment. It is like getting little chicks and rabbits at Easter time too.
I think the shelters should go ahead and advertise, but put as much importance on thinking the adoption through, and researching, etc, etc.

What a great story....we love your blog and are new followers..

love that story! What planning and amazing you were able to hide him!

Oh my Diana....that was a keeper. It;s memories like these that make Christmas so special. Thank you for sharing.
I remember one Christmas that dad picked me to go to the pet store and pick up a dog he had purchased for the family. It was a tiny fox terrier and I put him inside my jacket where he snuggled ands fell asleep. I don't remember much after that. But the fact that "I" got to go and pick him up was a huge treat for me!