Story Time: You Add To It, Please.

Here is the link to last week's story so you can see how it ended. You all are so very creative and it is amazing how the story evolves from day to day. Thank you for participating and making the story time so much fun.
Now, off to start a new story. Please, add your parts to it throughout the week in the comments below. 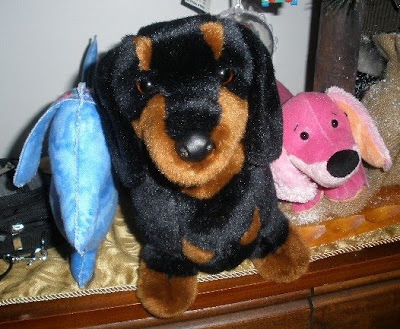 Once upon a time there were three stuffed wienie dogs that more than anything wanted to be real dogs. The children loved and played with them so much every day that it wasn't long before they started to show signs of damage.
They knew like toys in the past that if they lost their stuffings the children's Mother would throw them out. This worried the three wienies greatly each and every time the children played with them a little too roughly.
One day, the children had their grandmother visit. She brought them all new stuffed animals that actually barked and made other noises. The three dogs were so lonely for quite some time.
Then, one day the Chi Wizard saw how lonely they were. " I shall grant you one wish!" said the Chi Wizard, but it has to be one wish that all three of you have in your hearts. 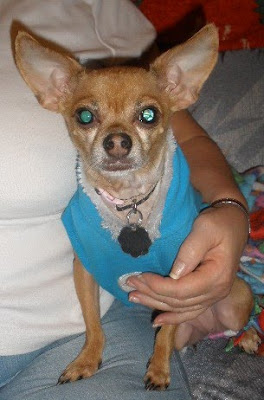 The wienies wished all together that they were real dogs. The Chi Wizard's eyes began to glow, and suddenly they were in the woods.
They looked at each other and they were real wiener dogs. They barked and chased each other for quite some time. They started to feel something that they have never felt before in the tummies. They were hungry. The dogs didn't know what to eat or how to catch something to eat so they kept walking deeper and deeper into the woods.
Just as the trees began to clear, they smelled a house like no other. It smelt sweet and yummy. They ran as fast as their short legs would let them. The house was made out of Gingerbread. The littlest wiener knew they probably shouldn't eat someone's house, but the bigger wienies convinced him to eat. Next thing you know, they all had very full bellies.
The biggest wienie who had ate the most of the house started to feel strange. His legs wouldn't move and he started to smell like gingerbread. Before his eyes, the littlest wienie saw the two other wienies turn to gingerbread. Then, he decided to run. But, he didn't waddle very far before he also was a gingerbread wienie. 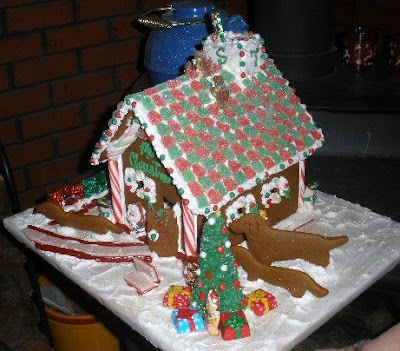 Much time had passed, and frosting snow had began to fall all around them. A small boy and his sister had stumbled upon the house while making their way to the market to buy some milk. The two children knew fairytales rather well so they knew not to eat the house. But, the little girl saw a tear fall from the littlest gingerbread wienie. "They need our help, Baxter." She said as she wiped the tear away.

Posted by SassySashadoxie at Sunday, January 16, 2011

Baxter and his sister Bree stood there for some time at a loss. Questions flooded their minds. But after several minutes of silence, Bree stated firmly, "I'm going inside."

The door opened easily.....too easily, actually. Sunshine streamed in through an east window and illumined a picture on the opposite wall. It was a sad picture. A small girl about the age of Bree stood at the gates of a city. The gates towered over her head and were made of ornate iron attached to stone piers at the sides. Her hair was black with long straggly braids. Her dress was shabby and worn, stained with all manner of dingy colors. But her eyes....it was her eyes that caught the childrens' attention. They were filled with tears. Was it the light from the sun or the quality of the painting? They stepped closer to see. They looked so real...like water glistening on her cheeks. Bree lifted her finger. "Bree!" shouted Baxter. "Look!" Behind the stone pier there was a tail. "Was that there before?" asked Baxter. Then it moved. The children gasped. They heard a whimper then saw a tear fall to the ground from the girl's face. And then an icy cold shriek from behind them...

"What have you done to my children?" boomed the voice.

Bree threw her arms around her brother in fear. Then they turned and saw a giant stuffed wienie dog, and boy did she look mad.

"I think that you do" boomed the giant wienie dog. "Why are my children made of gingerbread and frozen outside in the cold?"

"We don't know. Really. We just found them there" cried Bree.

"And yet you just left them there, out in the cold, to freeze. Bring them in here, hurry, hurry."

The children ran outside and worked and worked at the snow and ice surrounding the 3 gingerbread dogs, working carefully not to break them. After a long time, they finally got them loose and carried them inside.
But where was the giant wiener dog.
And what should they do with these 3 tiny gingerbread dogs?

Once inside, the littlest wienie could feel the life coming back to him again. He was able to move his tail, and then a paw.

Finally, he could move his whole body and he jumped up onto Bree and licked her face.

But, his brothers were not moving. They had been gingerbread longer than him. Maybe, it will take awhile for them to come out of it.

The giant wiener dog mom appeared back in the picture. My little one they can not awaken from the Gingerbread like you. They have eaten too much.

The only way to bring them back is to find the land of milk and cookies and bring back some milk from the river.

The children had heard of the land of milk and cookies, but have never been there. They knew it was very far and they should be getting to the market and then home.

The littlest wienie dog put his ears back and gave the sadest hound dog eyes ever.

The children could not refuse that face and agreed to help the littlest wienie dog find the river of milk in the land of milk and cookies.

The giant wiener dog mom instantly became more friendly. Her ruffled hair smoothed out and she seemed to have a hint of a smile.

"Okay then. You are going to need a bucket, to bring back the milk. I'll need to make you some sandwiches and snackes to eat on the way as the river is some distance from here. I'm going to go ahead and send this littlest wienie with you on your trip. He'll be able to sniff out the magic milk when you get close and can help protect you from any dangers you encounter."

"What type danger?" she asked breathlessly.

Mamma Wienie pulled back her lips and showed her teeth for a split second, then relaxed again.

"In the Dark Forest you will have to deal with the evil squirrels. Many are as big as a man and they are well trained in mind control."

"But wienie dogs are immune to the mind control of the giant squirels." continued the weiner dog Mom. "They have some mind control powers of thier own. Only little girls and little boys are not, so you must be very careful"

"Over the milk river and threw the woods." sang Baxter

"Lions, and tigers and giant squirrels, Oh my" sang Bree

Even the little wienie dog started dancing and kicking up his heels as they skipped along.

Finally after a very long walk they came to a gate. The gate was open, but beyond the gate, all the grass was dead, and there were clouds over head.
They wanted to turn back, but the wienie dog convinced them with his mind control that they had to continue, and he put a picture of the big momma dog in their minds.
So continued they did.

The black clouds were really low to the ground. The weinie dog could easily walk under them, but Baxter and Bree had to walk around them. The wienie dog was again using his mind control to tell Baxter NOT to touch the clouds, but Baxter did not listen. He touched one of the clouds and a lightening bolt shot from the cloud, giving him a shock and knocking him to the ground.
Baxter thought to himself, maybe I should listen to this wienie dog after all.

And they continued on thier journey...

To be continued next week from here.