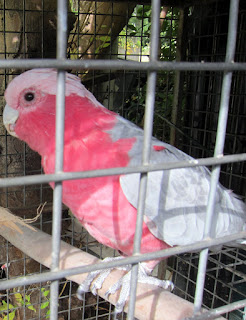 Hi all I'm Jess and am new to the blog here and am today writing about one
of my feathered kids Bert. He's a 21 year old Galah (Australian native cockatoo or Rosie breasted cockatoo) my other half and I live in Australia and are very passionate about keeping birds and togethe we have been keeping birds for a couple of years where as my other half has kept birds since he was young. 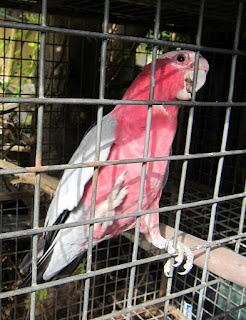 We decided to adopt Bert after a friend contacted us as she used to run a bird rescue
shelter and knew we were after a Galah after my other halfs dad's Galah "Pete" passed
away. When we met Bert we realized he was too much of a pet bird to be put outside in
an aviary, at least straight away. Bert came home with us the weekend before Christmas three years ago. We soon found out that he was raised like a child would have been and would act like a child if he didn't get his way.

He is a very smart bird and says puss puss, Ziggy, what, what doing? and hello, I have once heard him say Bert. His favorite thing to do is sit on your lap for a head scratch, he would sit for hours 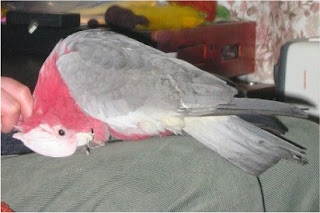 We can only assume his backgroud he had been handraised well as he loves people
so much he never thought himself a bird. This can be a good and bad thing when keeping a pet bird
He loves a chin and head scratch as you can see, he's the most friendly bird I've ever met,he's never bitten and loves attention. He follows me around the house, waddling its the cutest thing ever. 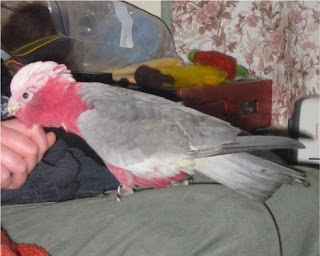 Over all Bert is a very loving and friendly Bird, he has never bitten and has had only minor health complaints which we have dealt with ourselves. We had Bert inside for approx six months and knew we needed to train him to be in an outside aviary. He's now as happy as Larry being able to talk to the other birds and the other wild Galahs that fly over. I have even witnessed other wild Galahs sitting on his aviary knowing he's a male Galah.

I hope you have enjoyed meeting Bert the Galah
Posted by WhingingNinja at Tuesday, April 03, 2012

Bert looks and acts so sweet! I love watching birds and may get some one day :) I love his coloring.

I am in love with Bert!! He is so pretty and so sweet.
You and your other half are great bird parents. :-)

Excellent post! I loved meeting Bert and seeing his personality :) What a sweetheart! I wish I could say that my bird had never bitten... I LOVE to learn about birds, and so look forward to hearing about all your feathered babies :)

Hi Bert! You are a beauty for sure!
How fun to read about his faves and how he chats with all his friends! And such a good boy - no biting!

Really enjoyed reading about your beautiful Galah, Bert. So cool that are indigenous to where you live. What pretty coloring too! I know someone on the team who will flip over his pink color....Pauline, loves anything pink! Thanks for sharing.

Hi Bert! Nice to meet you. Thank you Jess for the wonderful post. It is great to get to know more about you and your beautiful Galah.

I love your story. I learned alot about birds when i worked in petsmart a few years ago. I almost brought home a dove but thought twice because i have a cat.
Speakling of birds, we had a 'tagged' pigeon visiting us today. I hope he found his home. It amazes me how smart birds really are.

So interesting...to read about such a pretty pink bird....Tammy is right - we need a pink bird :)

This was a great blog and the pics were so good....what a delight to have this birdie on your knee enjoying a head scratch....aw !

Love Bert's pictures. What great bird peeps you are and how lucky you are to have an aviary. :)