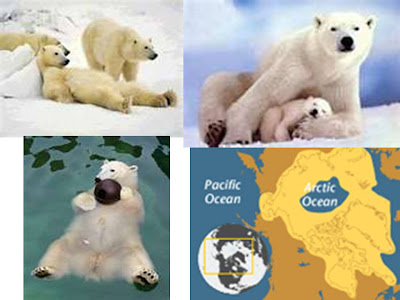 We tend to talk about our dogs and cats but I have a certain fondness for polar bears. Okay they are cute and are endangered and that’s nice. Well polar bears are certainly survivors. Just look at where they live: the Arctic...Alaska, Canada, Greenland, Norway and Russia as noted on the map. This is harsh territory but polar bears are adept at living here because of their coats.

Polar bears live in one of the planet's coldest environments and depend on a thick coat of insulated fur, which covers a warming layer of fat. Fur even grows on the bottom of their paws, which protects against cold surfaces and provides a good grip on ice. The bear's stark white coat provides camouflage in surrounding snow and ice. But under their fur, polar bears have black skin—the better to soak in the sun's warming rays.

Polar bears are attractive and appealing, but they are powerful predators that do not typically fear humans, which can make them dangerous. Near human settlements, they often acquire a taste for garbage, bringing bears and humans into perilous proximity.

In 1992, a photographer near Churchill, Manitoba, Canada took a now widely circulated set of photographs of a polar bear playing with a Canadian Eskimo Dog a tenth of its size. The pair wrestled harmlessly together each afternoon for ten days in a row for no apparent reason, although the bear may have been trying to demonstrate its friendliness in the hope of sharing the kennel's food. This kind of social interaction is uncommon; it is far more typical for polar bears to behave aggressively towards dogs.

A polar bear weighs in at a mere 900-1400 pounds. They are big! The ones I visited at the San Diego Zoo tend to be lighter due to the climate. I love to watch them play and could watch them all day. Polar bear moms are super moms too!
I have a series of postcards that are mounted and framed and make me laugh in stressful times. See some of their funny poses!

I hope you have enjoyed this information on them and will want to check them out a little bit more.

Annie - great post! My husband was raised in the Northwest Territories and he grew up playing with some of these dogs. They had a dog named 'Wolf' and he would pull him and his twin sister around on their sleigh.

The North is an amazing place to live according to those who've braved the North.

What a great post! I'm fascinated by them. Love the pics :)

Annie, This was a great post. I have seen some pictures of a polar bear playing with a dog.
I love all bears in general. We have black bears in PA, that I am fascinated with. You have to pull me into the house when they come near. LOL But, as big as these bears seem to look to me, and they are huge, they are only 400-500 pounds. I cannot even imagine what the size of these polar bears must be like up close. Wow.
That was so interesting that they have black skin.

Awesome post, Annie!! Polar bears are amazing!! We have a zoo/museum nearby us called the Ecoterium and they have a polar bear habitat with the bears. It is outside on two levels (of course the bears have inside areas too ;-) But on the bottom level outside it is like an aquarium and you can watch them dive into and under the water and play together! They are truly amazing and probably the biggest draw at the place!

Wow! This was such a neat post! I love to learn and all this was new information to me :) I think polar bears look like they are smiling :) Being in the south, it is a world away to see these frigid living conditions and how well these bears have adapted. I would love to have an Ecoterium like Kelly is talking about so I could get a better look at them. I'll certainly be seeing them with a much better understanding of them than I had before :)

Annie great post. I love both the dogs mentioned and the polar bears. :)

What a great post! I agree that they are cute and cuddly...but I'd be scared to death to see one face to face that wasn't a plushy!