THE OPINIONS EXPRESSED IN THIS BLOGPOST ARE THE OPINIONS OF THE ANGELPUPS (BIG MAC, MOLLY & MOXIE) AND THEIR MOM (KELLY) AND DO NOT REPRESENT THE OPINIONS OF ALL PETSJUBILEE TEAM MEMBERS...(Although I'm pretty sure some of my teammates agree...;-)

I will tell the truth...I am an honest to goodness dog lover. I come to 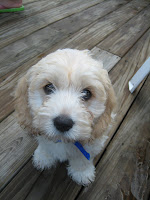 this late in life. I've had animals in my life before, but not until I brought home Big Mac, on my $% birthday in June of 2006, had I developed the true level of unconditional love for an animal that I now have for all three of my pups. I have received far more FROM my pups than I could ever offer them, and truly believe they are my "Angels on Earth"; true representations of and models for, unconditional love.
I also admit that I have never followed the Michael Vick story in detail, only because I c 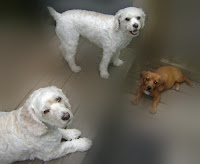 ould not possibly have the descriptions of what the poor, abused, ravaged, and broken animals endured at his "kennels" etched in my mind. The images would stay there forever and I didn't think I could handle it. When friends wanted to discuss the details of the abuse those beautiful dogs suffered, I covered my ears and hummed until I could leave the area. What I imagined was disgusting enough, the details would put me into a tailspin. I've also never seen any of the television or cable shows about the pups, again for fear that I would have images burned into my mind that could not be removed.
But, I've heard enough and seen enough headlines to have the basic details and to know that I don't respect Michael Vick one bit. I don't respect what he did; I don't respect his excuses for his behavior; and I don't respect that he is able to go right back to the famed life he led even as he tortured and destroyed those beautiful "Angels on Earth." 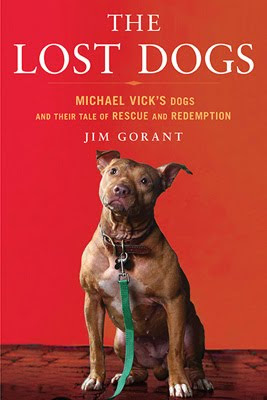 I happened on a blog this weekend that mentioned a new book by Jim Gorant called "The Lost Dogs" which tells the story of the rehabilitation and "rebirth" (my words) of some of the rescued pit bulls that were owned by Vick. I wish they weren't called "the Vick dogs" but that is what identifies them.
I can't give a true review since I haven't read the book yet, but I've looked up all the info I can and I can't wait to get my hands on it...The link below will take you to the publisher's page with info, video, reviews, and a preview of the book.
The Lost Dogs - Jim Gorant - Penguin Group (USA)

This short video is a promotion for the book, which you'll also find on the publisher's page....

And the video below is from a DogTown episode in August 2008..Again, I've never seen the program, although I wish I had the National Geographic Channel so I could watch the whole series. My heart just soars at what those devoted, caring people behind the rescue and rehab of these pups were willing to do to ensure they had a chance in life....one they deserved and that should not be taken from them for the likes of Michael Vick.
For those in the sports world, this weekend was about Vick's first NFL start of this year. For those of us in the animal world, it will always be about the phenomenal, loving, forgiving, devoted animals he tried to, but couldn't, destroy and the human angels who worked to undo the evil that Michael Vick perpertrated on them.
Kelly & Crew
Big Mac, Molly & Moxie
angelpupscreations.etsy.com
angelpupscreations.blogspot.com
Posted by AngelPups at Sunday, September 19, 2010

Aww, such a tragety for those poor dogs. But, I so agree that animals should never suffer the way these dogs did.

I could not imagine treating anything or anyone in the manner that these dogs were treated.

Well, it is at least a bit more comforting that some of these dogs do have a new start for a good life.
Thanks for the post Kelly.

I am so glad these dogs are getting a second chance at life since Vick is certainly getting his. In my opinion, animal lovers everywhere will have him forever 'marked', whether he becomes a super bowl champ or not. This is not just a mistake, it's a character flaw and something is seriously wrong with his make-up.

I left this comment on my own blog this morning:

I just happened to go into the living room this morning to turn off the TV that my son left on and of course, he had it tuned to the sports channel to catch up on scores. When I walked in, two commentators were talking about Vick's great weekend and then cut to an interview with his coach who said something to the effect of...

Well, it's so nice to see one of the greatest athletes get a second chance and be lucky enough that someone was willing to take a chance on him. You can just see "the sparkle in his eye" at getting the opportunity to play again.....

?!?!?
Too bad those pups who didn't make it out of his kennels will never have a second chance, a sparkle in their eye, or a chance to play.....

I feel like I'm living in some kind of warped reality....

Warped reality...isn't that the way of a fallen world? But one day justice will be had. May we take care never to be counted among the wicked.

I agree with you all. Call it karma, a spiritual axiom or whatever you wish, I think this man is a very troubled person and he will eventually have to answer for what he has done.