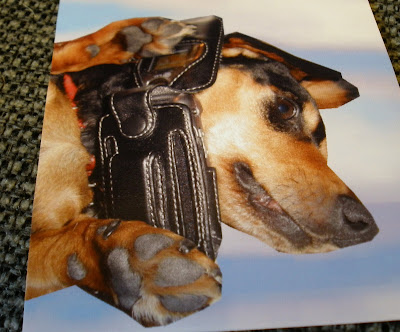 While trying to decide what to write for this week’s bIog, I thought I would dazzle everyone with bizarre animal facts. However there were some really disgusting ones so I decided to change to Pet Quirks.

Cody has many and I think would take a 10 page dissertation to go through them all. We all know that I think the world of him. It is important to know that Cody was raised in an apartment in New Jersey. He was almost 6 months old when I got him. I had to have a dog walker take him out twice a day as he was too young to hold it all day. Even though Cody has a yard and can take care of business whenever he wants, he thinks walks are pee and poo breaks.

Cody also does not like anyone who is angry or has any rage. I was awakened one night about 3 AM by Cody barking and growling out the front windows of the apartment in NJ. A guy was mistreating a woman and Cody did not like that. Of course I called the police.

He pushes his food out of his dish and eats it off the ground or floor. Loves it when I change his dog collar. Hates baths. Dislikes wearing any clothing but likes bandanas. He likes his tummy rubbed but not his head. Hates to be combed or brushed although he really has very little fur. Loves puppy massages.

Then there’s Copper. I call him my boob dog as he always puts his paws on my boobs. Loves to cuddle and sleep with me. Chases birds out of the yard, plays fetch and has an oral fixation – loves to have toys in his mouth. Loves to be brushed. His back paws are very sensitive and probably better to leave alone. He’s just a 50-pound lap dog.

But Copper likes to leap before he thinks. Last Friday I had the dogs with me at work. We went to the beach for lunch. The dogs are on harnesses and tied into the bed of the truck. Two surfers walk by and Cody barks and Copper tries to fly to greet them. Unfortunately he is on a leash and falls to the ground. It was very comical! He was a little shook up and but absolutely fine. He’s a sturdy little guy.

So that is just a few of the quirks of my boys. What quirks do your animals have?

Ok, what about Sasha isn't a quirk. heehee. The picture says it all. She just doesn't know she is a dog. heehee.

What a fun post! Always interesting to learn about our team's pets. Since I do not have a dog, here is my guinea pig comment. Tooey is my fave. He has many funny quirks. One is how he feels about the dust pan. Sometimes I leave the piggies in their cages and use the dust pan to scoop up the pine chips. The 3 girls & Jeff will go to the other side of the cage and stay clear of it. But not Tooey. He gets right on top of it and bites it!

Of all my babies, my Chilly the chiweenie has the most quirks. She loves to be hiding under anything she can find: blankets, laundry, towels, anything. She doesn't like to take treats from your hand, you have to put them on the floor. She eats her food on the sofa because she won't eat if it is on the floor. She needs her favorite security blanket to sleep at night. She hates to ride in the car. Well, you get the idea. It all doesn't matter. We love her to death and all her quirks are part of what makes her special.

I loved the blog Annie, and the quirks which make your babies special. And I loved the quirks of the rest of you as well. Toeey biting the dust pan is very funny.

Gianna likes to have her butt scratched. She loves to get wet and will stand under a hanging pot after you water just so the water will drain on top of her.

Giupetto loves to sleep on his back, you get the picture, and to have his belly rubbed. he loves whole body massages, and loves to get brushed, and loves hot sheets from the dryer.