This weekend I had my bird DaVinci out with my dog Gianna, still trying to make it work, and I thought that this is something I wanted to talk about.

The following are just some things to keep in mind, when adding another pet to a home that already has pets. Just because you want them to all get along, does not mean that they will.
You might have the sweetest dog and think she will get along with anything, but sometimes the animals just don’t mesh well together.

When introducing a new dog to a home that has a dog, it is a good idea to have them meet first outside the home – on neutral grounds. Once they meet and interact, then walk them in together.

Whether you are adding a cat, a dog, a bird, a guinea pig…always try to have a backup plan, in case it does not work out. If the 2 animals do not get along, what is your plan? Can you return the new pet? Can you keep both pets separated and safe from one another? Can you give both pets the life they deserve?

I thought I would share some of my experiences and stories -

I had a parrot for many years. And when I got my 2 little dogs, the bird wanted to attack them. I was afraid the bird would hurt the dogs, so I kept them separate. My backup plan included making sure I set aside some one on one time with the bird each day, without the dogs, and so we made it work.

Many years ago, I had a hamster. He got out of his cage and was gone. 2 weeks later, I purchased another hamster, and several days after that , guess who came back? And although they were both males, they did not get along in the same cage so I had to set up another cage and accessories, and so they lived side by side.

A few years back I got a little parrotlet, and my dog Gianna just adores him. He chases her around the floor and they get along fine. Here are some pictures. 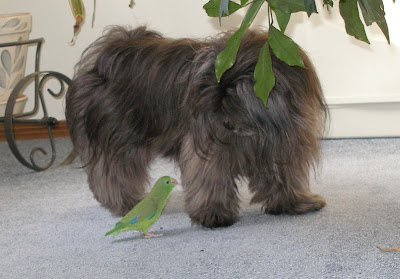 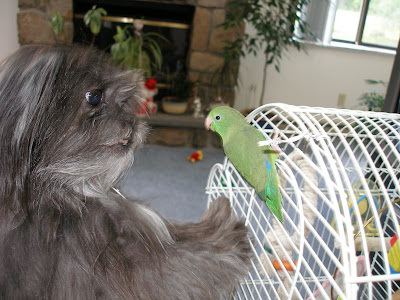 I recently decided to get another parrot. His name is DaVinci, and for some reason my dog Gianna seems to want to go after him. I cannot tell if she wants to hurt him, or play. I am determined to make it work, but I am taking small baby steps. This weekend was the longest I had them out together. Here is a video of their most recent interaction together.
Posted by Giupetto and Gianna Tails at Tuesday, February 01, 2011

I just loved getting to see the two interact! DaVinci still looks like such a baby! I forget he's so young :) His markings are beautiful! And I thought Gianna was a very good girl to watch and not pounce or get too excited. She's so cute and they are really fun to watch together :)

That was great! You are brave to let them be together...I think I would be a bit scared! As for introducing pets, I think it is a good idea to bring home a towel with the new pet's scent on it and let them smell it and get used to it a bit before bringing them home. Good info!!

cute birdie that DaVinci... be careful with Gianna...might turn into the mighty hunter and scare baby bird. Remember in nature little bird would be a meal for the pooch.
Both are so cute !!

That was great! Felt a bit sorry for DaVinci when he/she started walking backwards !!!

I love watching the two of the interact. They are so cute. Davinci does a lot of walking backwards which is interesting. I wonder what Gianna thinks. heehee.

Taking small steps when introducing a new pet is great advice! Thanks for writing such a good blog on introducing new pets into the home. Something I've found that works with Astrid (our dog) too, is if we know someone new (human) is coming for a visit, meeting them outside and then all coming in together seems to really set the tone for a good visit and makes Astrid much more relaxed with a 'stranger' in the house.