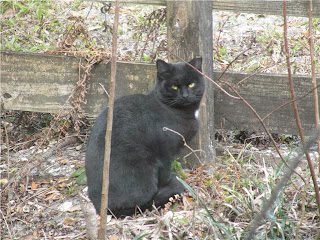 Gail of BritmericaLaneHandcrafts entered our photo contest last month with videos of Teddy and Snowball. We emailed back and forth quite a bit about 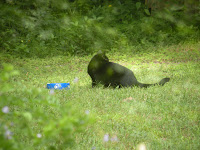 Snowball. I thought it was a great story and wanted to share it with you:

Snowball spent over a year outside as a feral cat. When we saw her out there, we would take a bowl of food and put it out in the open hoping she would find it. It was months before she would allow us to touch her. We fed her for 3-4 months before catching her in a trap to get her neutured. 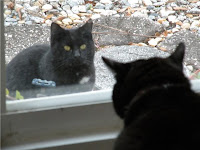 Shortly after she was neutured, on a nasty rainy day, I put her bowl of food inside the door of our sunroom so that she had to come inside to get it. (This is a picture of her meeting Sooty, another of our cats). Snowball would sit in a potted plant that sat on a small pedestal, so she could see inside. After a few days I started to shut the door behind her which at first freaked her out. 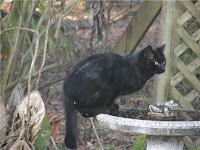 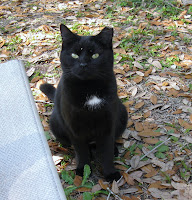 After a while she got used to it until another rainy day, I just kept her inside and the rest is history - she has been in ever since and is now the happy cat.

Now she has been indoors for about a year.

She loves to play with HER toy - we have 4 cats and she is the only one who plays with that particular one. Teddy has other toys similar and she plays with those, it was strange, but it was like that exactly what she did -teach Snowball how to play.

All of our cats (and our dog Scruffy, who recently passed away at 15 yrs) were abandoned or, in the case of our other black cat Sooty, who, we think was born in the wild also.

It took a lot of patience and time with both of them - over a period of months - for us to get anywhere near them.

I don't think that Snowball will ever be a sociable cat - she runs and hides under the bed when our son and family - or anyone come to the house. Although, when we here on holiday, she did come out of hiding when the neighbour came over to feed them all.

Now, Snowball has turned into a bit of a baby who loves attention. At night she snuggles on my lap while I am watching TV - it is almost like holding a baby. 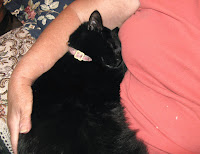 It was a really big day the first time she touched my hand with her nose through a small fence we have - just for a second, but that was the beginning - From then on, it was a lot of baby steps all the way until she has got to where she is now. 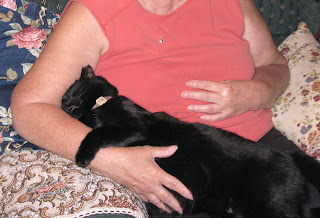 I just like to spread the word of what people throw out and what they (the people) are missing.
There is so much abuse of animals, especially these days, it seems.

CONGRATULATIONS :)
You've won your choice of a custom outfit or bandanna, or any item from either shop. 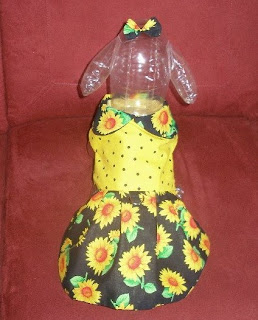 Thank you so much, Diana for contributing the prize and thank you everyone for entering!

We'll have another giveaway beginning May 21st. So stop by to enter.

Posted by Three Wishes Collective at Saturday, May 14, 2011

That is really such a great story, and I love the picture where snowball is really loving up to her new mommy. :-)

Also, a big congratulations to Adoruhbul Creations for winning my giveaway on PetsJubilee!!

What a fairytale ending for Snowball. Gail - you are an angel. What a joy it was to read this!