HYRAX
My son sent me a picture of these and titled it, "Angry Guinea Pigs". I thought I would do a little research on them. 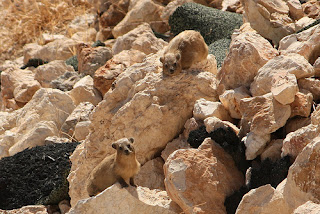 The hyrax, also called rock rabbit or dassie, is a small furry mammal. It looks like a robust, oversized guinea pig, or a rabbit with rounded ears and no tail.
The rock hyrax has the widest distribution in East Africa.  They live at sea level and up to altitudes of over 14,000 feet and in habitats ranging from dry savanna to dense rainforest to cold Afro-alpine moorland. Rock hyraxes do not dig burrows. They live in colonies of 50 or so in natural crevices of rocks or bolders. They are active in the daytime and can be seen feeding or sunning themselves near the entrances to their shelters.
Hyrax vocalizations include twitters, growls, whistles and shrieks. One group will answer the contact calls of another group. The raucous nocturnal shriek of the tree hyrax is most impressive, starting as a squeak or whistle, then rising to a piglike squeal and finally to a child's scream. Hyraxes do most of their screaming as they ascend or descend trees during the night. 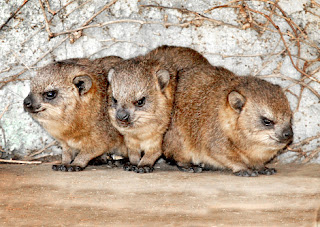 Rock hyraxes spend several hours sunbathing in the mornings, followed by short excursions to feed. They eat quickly with the family group facing out from a circle to watch for potential predators, feeding on grasses, herbage, leaves, fruit, insects, lizards and birds' eggs. After biting off a mouthful of grass or leaves, the hyrax looks up and cautiously checks the vicinity. If the territorial male gives the shrill shriek of alarm, the hyraxes jump or scuttle to cover where they remain frozen, without moving, until the danger has passed. They can go a long time without water, apparently obtaining enough moisture from their food. Tree hyraxes feed on leaves and fruits. 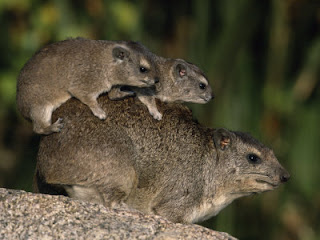 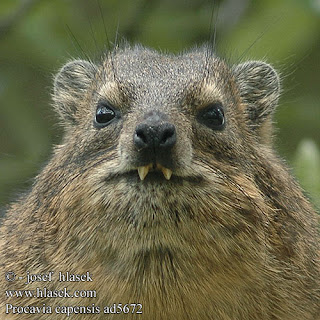 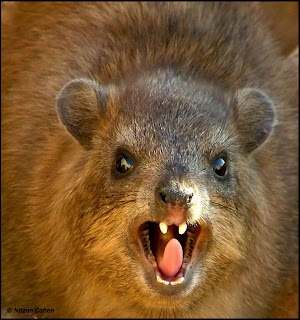 Don't EVER make a hyrax mad!
by Patty
from Catcalls
Posted by Art and Sew Forth at Wednesday, May 04, 2011

They do look like angry piggies. Maybe, they just need some loves like your piggies get and they won't be so grummy. heehee.

These are interesting little creatures. I don't think I would like to hear them screaming in the dark of night, frightening! Thanks, for teaching me something new today.

They are like the gremlins in that movie. They were guinea pigs, but then someone fed them after midnight. :-O
They are sort of cute, and do look like a combination of several animals all rolled into one.
very interesting read.
Thanks Patty.