How to hug a baby 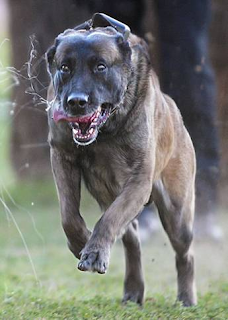 The
K9 above is Brutus, a military K9 at McChord.. . He's huge - part Boxer
and part British Bull Mastiff and tops the
scales at 200 lbs. His handler took the picture.
Brutus is running toward me because he knows I
have some Milk Bone treats, so he's slobbering away! I had to duck around a tree just before he got to me in case he couldn't stop, but he did.
Brutus was the recipient of the Congressional Medal of Honor last year from his tour in Iraq . His handler and
four other soldiers were taken hostage by
insurgents. Brutus and his handler communicate by sign language and he gave Brutus the signal
that meant 'go away but come back and find me'.
The Iraqis paid no attention to Brutus. He came back later and quietly tore the throat out of
one guard at one door and another guard at
another door. He then jumped against one of the
doors repeatedly (the guys were being held in an
old warehouse) until it opened. He went in and
untied his handler and they all escaped. He's
the first K9 to receive this honor.


If he knows
you're ok, he's a big old lug and wants to sit
in your lap. Enjoys the company of cats..
K-9 Congressional Medal
of Honor WinnerThought
you'd find this interesting.
Talk
about animal intelligence and bonding
with humans!


Remember that they can't do a lot of things for themselves and that they depend on you to make their life a quality life!Instructions for properly hugging a baby with Brutus 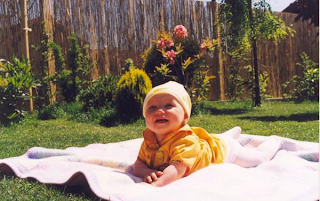 2. Second, be sure that the object you found
was indeed a baby, by employing classic sniffing
techniques. 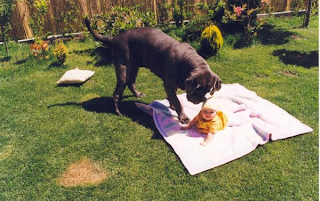 3. Next, you will need to flatten the baby before
actually beginning the hugging process. 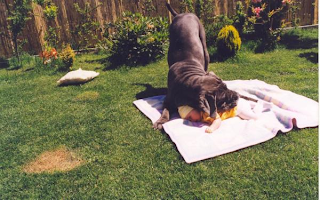 4. The 'paw slide'= Simply slide paws around baby
and prepare for possible close-up. 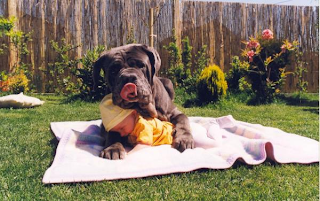 5. Finally, if a camera is present, you will need to execute
the difficult and patented 'hug, smile, and lean' so
as to achieve the best photo quality. 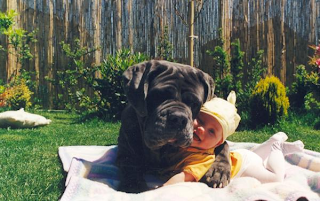 It will be a shame if you
don't pass this along!!

Alice from makingstuffwithlove shared this with you this week.


Posted by SassySashadoxie at Thursday, February 16, 2012

That is truly astounding in every way! I want a Brutus!

I love it! What an amazing dog!