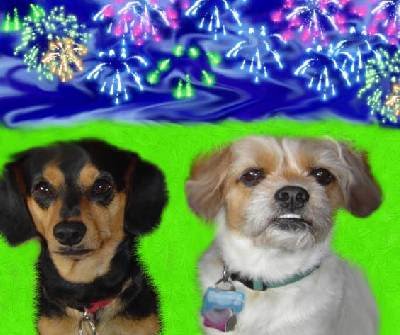 Three dogs survived the sinking of the Titanic – a Newfoundland, a Pomeranian, and a Pekingese.

At the end of the Beatles’ song “A Day in the Life”, a high-pitched dog whistle was recorded by Paul McCartney for his sheepdog.

70% of people sign their pet’s name on greeting and holiday cards; 58% put pets in family and holiday portraits.

Only dogs and humans have prostates -- but dogs do not have an appendix.

All dogs are identical in anatomy – A dog has 319-321 bones in its body, which is about 115 more than humans. The length of the tail is the only thing that causes a difference from one breed to another. Long tails contain more bones than short tails. All have 42 permanent teeth.

Posted by SassySashadoxie at Thursday, August 11, 2011

I had no idea dogs had so many bones!
I think Sasha was originally bred to fight squirrels...

I'm loving all these facts. I would like to know the details (if any) of the dogs that survived the Titanic.

so interesting! sometimes, i draw a little paw print after Velvet's name :)

As always, thanks for the fun facts! :)