Today is Vesuvius Day. It marks the date in 79 A.D. that Mount Vesuvius exploded.
August 24, 79 A.D. was an historic date for the world. This was the day that Mount Vesuvius erupted in a huge explosion. It was one of the largest volcanic explosions in recorded history.
This deadly volcano destroyed the Roman cities of Pompeii, Herculaneum, and Stabiae. They were buried by volcanic ash and pumice. An estimated 3,360 people died in the volcano's eruption.
Mount Vesuvius also exploded a second time in 1631. At that time, it killed approximately 3,500 people.
What a sad day. One day life all a bustle and full of sights and sounds and smells. And then....everything is quiet. It's all gone. 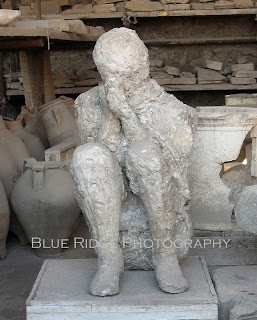 From Blue Ridge Studio:
It was estimated that the Roman city of Pompeii had 20,000 inhabitants at the time Mt. Vesuvius erupted and buried the city in ash in 79AD. Over time, as archaeologists excavated the site, they found voids in the ash and decided to pour plaster into the voids, to see what had been there. This photo is of a plaster cast, which was taken from one of those voids, a fallen resident of Pompeii. 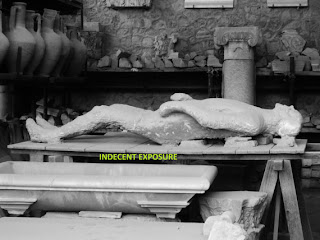 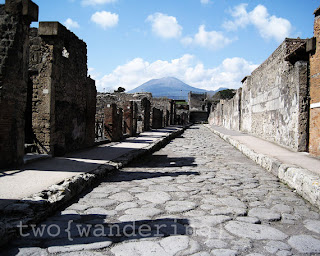 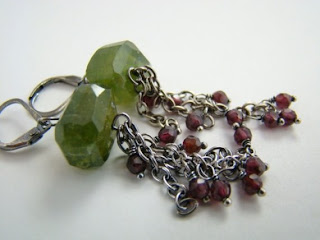 Stunning Vesuvianite chunk--yes from Mt. Vesuvius--is embellished with a cascade of garnets on oxidized sterling silver. Sterling silver leverbacks. A gorgeous mix of past & present.
Patty from Dogbarks
Posted by Art and Sew Forth at Wednesday, August 24, 2011

Wow, just stops you in your tracks thinking of what can happen without warning sometimes.
The cast figure is amazing.