April is National Frog Month!
We  probably all have frog stories to tell. I know I have spent many hours trying to catch them! I remember when my son caught a giant bullfrog in the pond. It was 18-20 inches when held up! So in honor of frogs, here's a little poem and a few goodies from Etsy.
Ribbit-Ribbit!
Five little tadpoles
Swimming near the shore.
The first one said,
“Let’s swim some more.”
The second one said,
“Let’s rest awhile.”
The third one said,
Swimming makes me smile.”
The fourth one said,
My legs are growing long.”
The fifth one said,
I’m getting very strong!”
Five little tadpoles
Will soon be frogs.
They’ll jump from the water
And sit on logs. 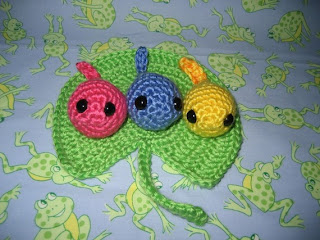 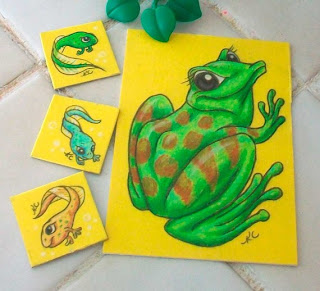 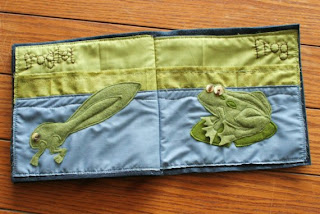 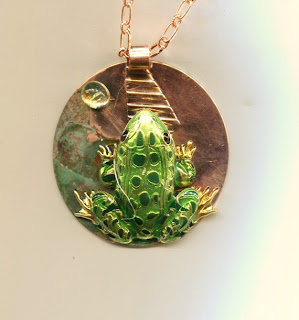 By Patty from Catcalls
Posted by Art and Sew Forth at Wednesday, April 13, 2011

Aww, I remeber catching frogs as a kid. Oh, and the whole watching tadpoles develope. It was so cool. Go froggy month. :)

Loved the post and it makes me remember childhood as well. We had a large above the ground pool growing up, and during the winter wee would find tadpoles in the pool, and watched them develop into frogs. It was pretty cool.

Great post :) My sister and I used to catch frogs from a pond near our house. I know the last time she went she sunk up to her knee in mud and lost her shoe. lol.

This brings back good memories for me as well. As a child I would visit my Aunt & Uncle's house in Golden's Bridge and catch frogs in their pond. Love the items (Green is my favorite color)! Thanks Patty.

Add me to the list -- we caught little tiny frogs at my grandparent's lake house as a child. They were so cute! I liked seeing everyone's stories :)

Oh, what a fun blogpost! I too have frog stories. My dad used to go frogging down on the river near our house, and would catch great big bullfrogs, us kids would have so much fun playing with them. Thanks, Patty, I love the items you picked to highlight.