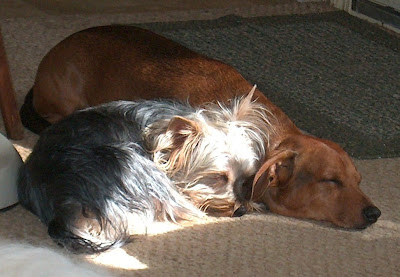 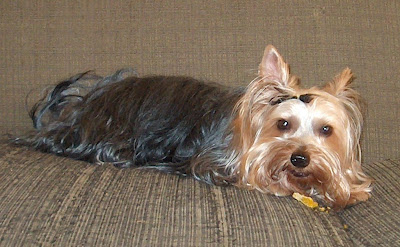 My story this week is about Jake, my latest addition to our family. I heard about him from a co-worker of my mom. She was worried he wasn’t getting food or shelter as he needed. He was being kept in a pen in the back of the house and she saw him clinging to the side when she visited, trying to get some attention from anyone. When I first heard her story, I didn’t even mention it to my husband. We already had the three dogs I’ve told you about already and I thought my husband wouldn’t hear of it. Out of the blue one night I casually mentioned that there was a lady looking for a home for a Yorkie, did he think we might take him? To my complete surprise, he thought it was a good idea. I warned him that Jake had ‘problems’, but he was still willing. I couldn’t believe Jake was still available, but he was and we became his proud new owners. The first time we left Jake alone, we came home to a house filled with confetti -- he’d found the phone book. The next time we left him, the mess was even worse. We were beginning to see some of the problems he must have given the previous owners. But once a dog comes to our house, they stay, problems and all. So we purchased a crate, and put him in when we had to leave the house. We hated it more than he did, because we’d open the door and he’d come running in from wherever he was, being so good for us. And he was even better to wait there until we got back home. Then a few months ago, we had a day when we were going to be gone for hours. We didn’t want to leave him caged up so long, so we took a chance and left him out. Magically, he no longer has the separation anxiety that led to his destructions. He hasn’t torn up another thing. So no more crating needed. A spectacular ending to a sad story! This no-longer-misbehaving little dog has stolen my heart. He loves our bed, I think because he didn’t have one for so long. He also loves petting -- can’t get enough. He acts like a fainting goat: at the first signs of a rub, he literally falls over and waits for the loving that’s coming. I find it hard to imagine this snuggly little dog was being deprived of the attention he so desperately needs. Montana is teaching him all the tricks he knows such as stealing our things in exchange for a treat -- negative rewarding at its best. Also how to paw the food bowl when empty for a refill. I really believe Montana sees him as his protégé. Jake is so cute, I honestly kept expecting a call saying the previous owners had changed their minds and wanted him back. Who wouldn’t LOVE this little dog? We’ve had him nearly a year now and I’ve realized these people have no idea what they passed up. He’s all ours, and we couldn’t be happier!

Oh, Alice! I am so happy for Jake. What a lucky dog he is. ALL your dogs are lucky. What a beautiful mix of adoptees into your loving home. Thank you for sharing all these wonderful stories!

I love reading great stories like this. You and James are such good people to take in these dogs, problems and all. And with lots of love, turn their problems around.
So happy for you and for Jake.
Thanks for sharing.

such a wonderful and heartwarming story!!! i can just seeing him falling over to be loved on :) and so glad he found you two.

What a wonderful happy ending! This has made my day, thanks Alice!!

p.s. He's beautiful! I love his shiney silver coat. I want one!

Very heartwarming story - so very glad for you Alice ! and to think that bit of discipline led to a perfectly trained happy doggie.....so nice to read! What a houseful of love you have there :)

What a lovely story, Jake is one adorable dog.

Thank you so much everybody :) We are just crazy about him!